The most numerous and, collectively, the most powerful form of government on earth is the family. This is why worldly governments are so obsessed with destroying and undermining families.
Post Reply
15 posts

Remedy "such as the federal audits" specified in the Federal Adoption Assistance and Child Welfare Act of 1980!!!! Follow the money...
The intent of federal IV-D legislation is to recoup taxpayer money already spent on providing these welfare services to children who have been willfully abandoned by a parent and left to rely on the government to self-sustain.
Follow the money Title IV-D flow chart Title IV-D is lingo you must learn if you are to effectively work towards understanding, changing, or fighting the family law (domestic relations) system. If you receive a monthly child support statement from the state “payment center,” and if you make your support payments to the state instead of directly to the other parent, then your family problems are no longer a private matter; and rightly or wrongly, your private problems have become a public matter, under the control and heavy hand of the government, and you are a Title IV-D case. Over 77% of the current Title IV-D cases may not belong in the public system, and your case might be one of them. The State receives 3 to 5 dollars for every dollar they extort from a non custodial parent from the federal government!!!

States Triple Dip In The Name of Child Support 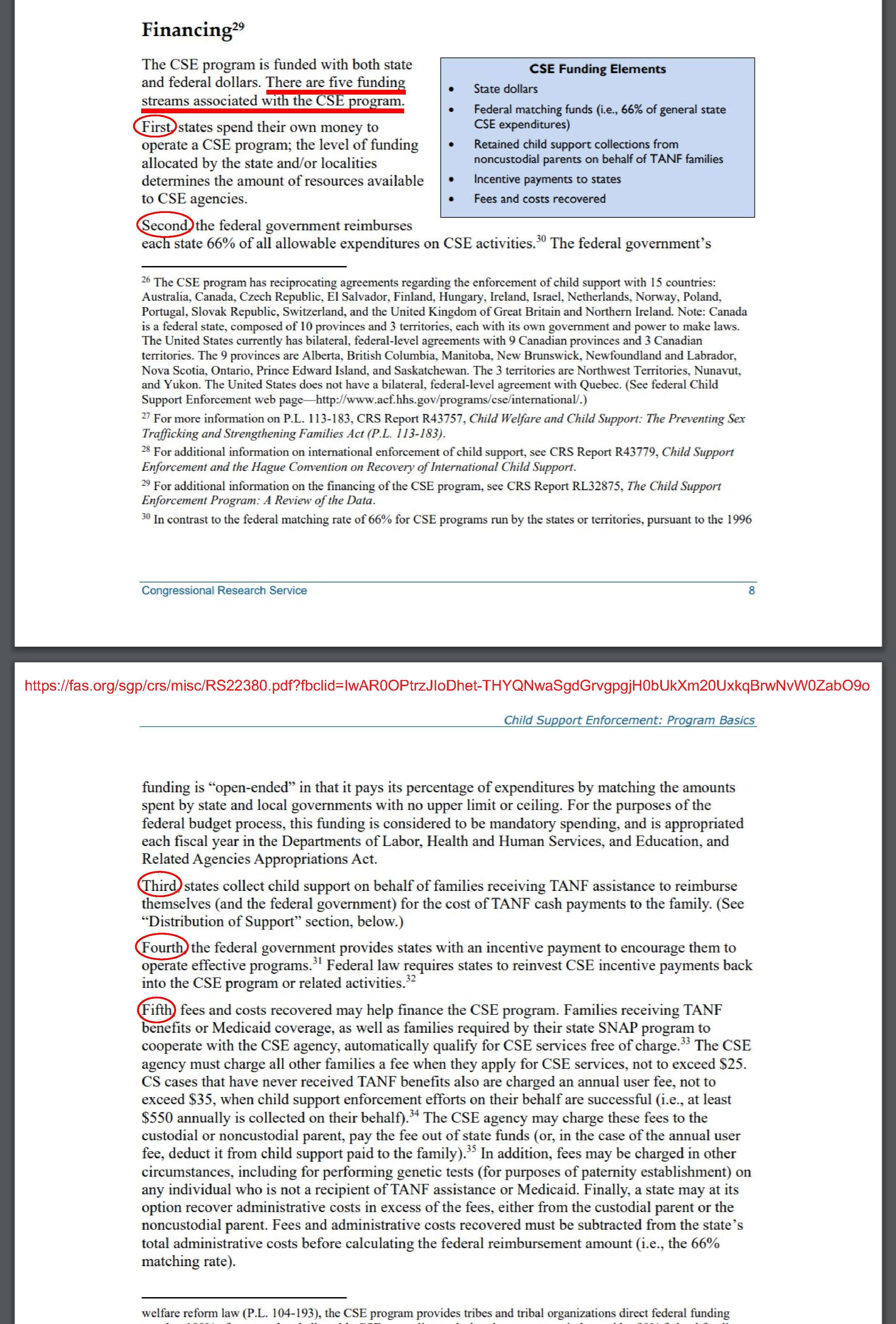 There are five funding streams for the Child Support Enforcement Program;

Each budget expands off the previous budget’s expenditures;

The child support program generates income for both the federal government and the states;

“Money that is paid to the children are collected for the children (child support money) are matched by the federal government [66% reimbursement] AND THEN [Plus] THERE ARE INCENTIVES for DIFFERENT types of enforcement activities (matching funds at state and local levels as well), and so the judges each time that they grant or approve The Friend of the Court up someone’s child support collection their actually what they’re doing is padding their own pockets because that comes back to them, it indirectly comes back to them.” ~ Carol Rhodes 6:24

"The Child Support Industry is the darling of the circuit court and that we actually made money for the judge and the court unlike the Sheriff's Department and so many agencies; our county our state was not an exception to the rule..." ~ Carol Rhodes 1:21

Title IV-D Contractors;
Federal Title IV-D Program 'Duty of Care' administered at the state level;
Office of Child Support (OCS) who then contracts the legal services of local prosecutors, sheriffs, and foc offices;
How has this term impacted your life?

Title IV-D Sheriff Agreements
Sheriff and or Sheriff's Deputies handle warrants (along with other non-traditional enforcement duties)
and is a IV-D employee of the Friend of the Court!!!

Federal policy restricts the expenditures of IV-D funds spent for “arrest activity.” Further guidelines regarding federal approval of purchase of service agreements and fees for service agreements for arrest activities may be found in OCSE-AT-79-3, and by referring to OCSE Policy Interpretation Question (PIQ)-81-02, Fee for Service in Sheriff’s Agreements (Ref: Exhibit 2010-003E3) and PIQ-81-13, Eligibility for FFP – Inclusion of Deputy Sheriff in the Unit Cost Rate Computation in South Carolina (Ref: Exhibit 2010-003E4).
Regardless of whether OCSE approval is needed, all Cooperative Reimbursement Program (CRP) subcontracts require prior written approval from OCS staff and must meet other requirements as outlined in the CRP. FOC staff can subcontract with the sheriff for full-time or part-time services. In both instances, FOC staff must submit a copy of the agreement with the CRP application. In a part-time agreement, the officer must provide the court with a time sheet (per pay period) that shows the hours spent on IV-D activity and the hours spent on sheriff department activity. If the bench warrant officer reports to the FOC (is directly supervised by FOC staff), then no subagreement is necessary."
IV-D MEMORANDUM 2010-003 (State of Michigan Department of Human Services Lansing)

Title IV-D Contractors (Child Support Enforcement Agencies) are the driving factor for the creation of a non-custodial parent and the creation of a child support order.
Federal Title IV-D Program dollars is what is keeping state and local county government budgets afloat (feeding the statists).

Grant programs are being used for revenue generation by the states as opposed to solving legitimate societal problems. States being able to use the Title IV-D / Child Support Enforcement Program as a tool for State Revenue Generation instead of Aid for Actual Needy Families. Government for the people by the people; the state and local governments need to find a new source of funding without destroying families for their actors acting as the de jure government via private for profit public contacts; contractual agreements; civil servants. This is how it works!

[The feds blamed it on "an overall lack of ... understanding" of federal forms.]

A child's right equal time with both fit parents!

A new set of crimes, it creates civil orders without rights, without your rights because you weren’t there. We often have what you call an ex parte hearing, that means one were only one side goes in and the other side doesn’t get any notice, has no idea that there is a hearing going on, and doesn’t even show up because they don’t know it’s happening.

No Temporary Assistance to Needy Families was paid out by taxpayers for recoupment regarding Title IV-D Case (SIX PACK JOE). There is no agreement entered into by the Six Pack Joe required to abscond the welfare requirement for Title IV Services, including Part D of Title IV; for the Defendants to claim otherwise is fraud. Not only does this injure the Six Pack Joe but it is also fraud on the taxpayer and taxpayer monies - the Defendants known misrepresentation of the Federal Title IV-D Program ‘their use of trickery to achieve a political, financial, and legal purpose’. [ I bet this will piss

(2) to be a current or former government official, or a person acting for or on behalf of such an official, who is responsible for or complicit in, or has directly or indirectly engaged in:

(a) corruption, including the misappropriation of state assets, the expropriation of private assets for personal gain, corruption related to government contracts or the extraction of natural resources, or bribery; or

(3) to be or have been a leader or official of:

(a) an entity, including any government entity, that has engaged in, or whose members have engaged in, any of the activities described in (1), (2)(a), or (2)(b) above relating to the leader’s or official’s tenure; or

(b) an entity whose property and interests in property are blocked pursuant to the order as a result of activities related to the leader’s or the official’s tenure; or

Has any Man in this forum presented them selvs sui juris in there divorce? Any sucesses? I need help. I have spent the last 8 months on studing all this stuff and I would like some feed back and bounce some ideas off of each other. Thanks
Top
Post Reply
15 posts

Return to “Family / Marriage, Divorce, and Freedom for our Children”