Comments about your favorite candidate, the newest PROPOSED law, and the FEMA camp near your hometown should go here.
Post Reply
13 posts

The suspense is killing.
Which parties will form the cabinet to inform us about the policy of King Willem-Alexander?

“Demissionair” VVD minster for health care Edith Schippers (another alumnus of Leiden University, like King Willem-Alexander and PM Mark Rutte), as "informateur", on 15 May shocked us with the announcement that the first effort of the “kabinetsformatie” has failed.
This involved: VVD, D66, CDA and Groen Links.
The given reason is that Groen Links couldn’t agree on the migration policy with the others.
How can these parties disagree? All of them are part of the one-party-state of Orange-Nassau…

For some reason VVD, D66, CDA are already “certain” of the new cabinet.
There are now according to the state media 3 other possible parties to add to the “certain” VVD, D66 and CDA to make the cabinet a majority (in the “tweede kamer”): the PVV (of Wilders), PvdA and Christen Unie.
PvdA is unlikely after being decimated (from 38 to 9 seats) in the last election, and Christen Unie seems even more farfetched (in Dutch): http://www.elsevier.nl/nederland/achter ... en-503346/

All of the (other) parties have vehemently stated that they don’t want to form a coalition with the PVV of Geert Wilders.
It would be bizarre if the formation with Groen Links failed over migration, but not with the PVV…

Geert Wilders has said he will shut the borders on Muslims migrating to the Netherlands.
According to the state media it is racist to refuse refugees.
Most of the migrants coming to the Netherlands aren’t refugees, however, but from countries that are considered democratic (like Turkey and Morocco); but of course not nearly as great as our high standards of democracy and freedom of speech (you’d better not disagree with the King though...).

What’s strange in all this hysteria is that (almost) nobody seems to consider the SP (the Dutch version of socialist communism).


A strange story that gets a lot attention from the state media, is the scandal involving VVD president Henry Keizer, who on 16 May 2017 was accused by Pieter Lakeman with embezzlement of millions in the takeover of the “Facultatieve”.
Lakeman requested that the “Openbaar Ministerie” (District Attorney) will press charges within 2 months (in Dutch): https://www.ftm.nl/artikelen/pieter-lak ... er?share=1

The VVD has started an “investigation” while PM (Puppet Minister) Mark Rutte has called Henry Keizer a man of integrity.
Could all of this “news” be only a ploy to divert our attention from what’s really going on?
For some reason internet “search” engines block my posts: https://forum.davidicke.com/showthread. ... 924&page=2
http://www.ronpaulforums.com/showthread ... orld/page2
Top

An update on the politrics in the Netherlands...
Edith Schippers has been replaced by new “informateur” Herman Tjeenk Willink (another alumnus of Leiden University, like King Willem-Alexander, Schippers and PM Mark Rutte), who tried to form a cabinet of (the same parties) VVD, D66, CDA and GroenLinks...

In the words of Geert Wilders even a “dead horse” could have seen that this would fail, and it did.
On 12 June, Tjeenk Willink announced that GroenLinks couldn’t agree on the migration policy with the 3 others – am I having a déjà vu here?
According to Willink - SP and PVV are out of the question...
Willink was earlier selected as “informateur” in 1994 and 2010.

Tjeenk Willink is one of the most highly respected politicians of the Netherlands.
In 1987, Willink became a member of the “Eerste kamer” for the PvdA (Labour), from 1991-1997 he was president of the “Eerste kamer”.
From 1997 to 2012 he was even the right-hand man of (then) Queen Beatrix as vice-president of the Raad van State. Willink has been knighted several times because of his great contribution to the Royal family.
In 2012, Willink was selected as “minister van Staat” by Beatrix, a function for which the responsibilities aren’t clear (at least not to me).

Not only does the EU import huge amount of migrants, they even pay other countries to do the same...
According to the following article, the proposal on migration involves plans that the European Union can pay money to countries to import migrants (in Dutch): http://www.telegraaf.nl/binnenland/2838 ... ed___.html

The video shows the following picture; if I understand correctly this is the young Geert Wilders with long hair, smoking a cigarette (this is the first photo of a young Wilders that I’ve seen)... Stephen Robert Morse is one of those wonderful philanthropic people involved in globalisation and sustainable development (the problem of overpopulation), and has connections at the highly influential Oxford where he got his MBA at the Saïd Business School: https://www.gtc.ox.ac.uk/news/news-arti ... -blog.html

The following video is in Dutch.
Geert Wilders in a speech in the “Tweede Kamer” filled with great one-liners.
He ridicules D66-leader Alexander Pechtold, he calls the effort to again try a cabinet with GroenLinks stupid because even a “dead horse” would know this would fail and mentions the terror threat of the Islam.
He also explicitly plays the “anti-establishment” role by stressing that there have been 2 failed attempts at forming a coalition with GroenLinks, that PM Mark Rutte should be ashamed but none with the PVV, and says that the PVV is prepared to negotiate: https://www.youtube.com/watch?v=LKxfgF7YXIs
For some reason internet “search” engines block my posts: https://forum.davidicke.com/showthread. ... 924&page=2
http://www.ronpaulforums.com/showthread ... orld/page2
Top

In 2004, the media first announced that Israel’s favourite Dutch politician Geert Wilders (leader of the Freedom Party, PVV) was given 24-hour protection to make him appear authentic. Wilders has visited Israel numerous times and talks about Israel as the last defender of democracy.
The organisations that sponsor Wilders from the US overlap. The same people appear different conferences, sat on each others’ boards, and gave each other awards. This “Islamophobia network”, as critics called it, included the Middle East Forum of Daniel Pipes, the David Horowitz Freedom Center, Frank Gaffney’s Center for Security Policy, and bloggers like Pamela Geller.

Wilders has also received financial support, including from member of the Council on Foreign Relations Nina Rosenwald, who founded the Gatestone Institute.

The Middle East Forum, provided money in the “six figures” to help pay “legal bills” for Wilders in the trial over his 2008 anti-Islam film “Fitna” that was staged in the Netherlands to given him additional exposure (and votes).
Daniel Pipes launched several “buttons” on websites of American organizations to donate money for a defence fund for Wilders. The amount raised is unknown; at the time, political parties in the Netherlands were not required to disclose contributions from abroad. Wilders himself denied that the money benefitted him or his party (no possibility fo verify).

The David Horowitz Freedom Centre has donated “roughly $150.000” to Geert Wilders over a 2 year period (in 2015, the PVV received 108,000 euros, nearly $120,000).
Senior Vice President of Macquarie Group Limited, Horowitz, was an investement banker for... Goldman Sachs.

Since January 2016, Wilders writes a montlhy column for Breitbart, where Trump’s resigned chief strategist Steve Bannon was (and is) CEO.
Bannon and Wilders are also linked by the late Avi Davis, whom Bannon knew and praised as a “friend” to Breitbart News. Davis was founder and president of the American Freedom Alliance and organised the 2009 dinner where Wilders was prasied of the “hero of conscience” he isn’t.

Pamela Geller is a long-time Wilders ally, who invited him for his first visit to the US in 2009.
He made an appearance in Washington at the annual Conservative Political Action Committee conference, and later turned up in Florida, Boston, and California.

From June 2013 to July 2016, Wilders made 6 trips to the US.
They were sponsored by the Freedom Center, the Gatestone Institute, and the International Freedom Alliance Foundation.
According to its 2015 IRS form, Robert J. Shillman is the only office holder of the International Freedom Alliance Foundation. Shillman is also an important donor to the David Horowitz Freedom Center and a Trump supporter.

In April 2015, Wilders spent 2 days in Washington when he gave a press conference near the Capitol with Gohmert and Steve King and spoke at a breakfast meeting organised by King.

In July 2016, Wilders delivered his usual message at an event called “Wake Up!” where Islam was presented as a threat to homosexual people: https://foreignpolicy.com/2017/03/01/ho ... lamophobe/


For more information on the SCL Group (Cambridge Analytica) and the Gatestone Institute: https://www.lawfulpath.com/forum/viewto ... 5478#p5477


Member for the Tweede Kamer for the PVV, Gidi Markuszower (born in Tel Aviv, Israel), was spokesman of the Dutch branch of Benjamin “Bibi” Netanyahu’s Likud party from 1999 to 2005.
In 2010, Markuszower had to withdraw his candidacy because 2 years earlier he had been arrested by the Dutch cops for illegal firearms possession at an event for the Likud party.

Subsequently it was reported that Markuszower had been under investigation by the AIVD (Dutch intelligence) for having “passed on information to foreign sources”.
According to the Dutch newspaper NRC Handelsblad, Markuszower was working for Israel’s intelligence agency Mossad. 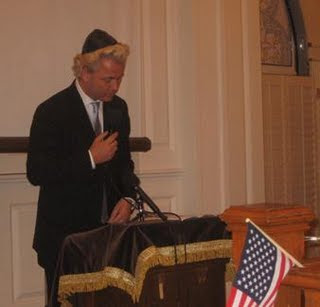