I have found information on crimes against humanity against children in Canada, colony of England.
These are the responsible Governor Generals from 1946 till 1974 (in between brackets the years in which they were appointed): The Viscount Alexander of Tunis (1946), Vincent Massey (1952), Georges Vanier (1959), and Roland Michener (1967-1974).
This quote is from another thread, which is also relevant in this context.

Firestarter wrote:Another scandal is the terrible story of the ten thousands Duplessis’ orphans, that were sentenced to mental diseases in Canada in the 1940s and 1950s. They were named after former Quebec Prime Minister Maurice Duplessis. Already in 1962 the Bedard Commission acknowledged that one-third of the 22,000 psychiatric patients did not belong.
These children were simply told one day that they were retards, didn’t get any schooling and had to perform slave labour. As if this wasn’t enough they got treated with corporal punishment, experimental anti-psychotics (like Chlorpromazine), ECT, lobotomies, and a large number was sexually molested. Medical records were falsified to hide the evidence.
The orphanages were stimulated to declare these children insane because the government paid only $1.25 a day for orphans, but $2.75 a day for psychiatric patients. In 1999, Léo-Paul Lauzon and Martin Poirier estimated that Christian groups received $70 million in subsidies (measured in 1999 dollars) by claiming children as "mentally deficient" while the government saved $37 million by having one of its orphanages redesignated from an educational institution to a psychiatric hospital. This is not even counting the lucrative deals made with CIA and pharmaceutical industry for the chance of experimenting on these children.
In 2001 the Canadian government offered 10,000 dollar plus an additional 1000 dollar for each year spent in an asylum, but only, for surviving orphans that got lobotomies (1,500 people qualified for compensation) and in 2006 they provided an additional $26 million compensation. To put this in perspective: this is less than the orphanages got in the first place, while 1000 dollar a year amounts to 2.76 dollar per day.
Not one of the psychiatrists or child care workers that participated in the torture of these children were charged in a criminal case. Of course the tax payers can rest assured, knowing that no attorney will try to get adequate compensation for these children (thanks to government-controlled attorneys.).
On the following sites more information on Duplessis’ orphans: http://www.freedommag.org/english/vol37i1/page04.htm
http://historyofrights.ca/encyclopaedia ... s-orphans/

The genocide on Native American children in Catholic residential schools in Canada from the end of the nineteenth century on is well-documented. It is estimated that some 50,000 children were killed, while also a lot of potential mothers were sterilised.
Here you can read that the Canadian government (of Queen Elizabeth) together with the Catholic Church has been trying to exterminate all Native Americans (for a final solution): http://canadiangenocide.nativeweb.org/genocide.pdf
On April 12, 1910 D.C. Scott declared: “It is readily acknowledged that Indian children lose their natural resistance to illness by habitating so closely in these schools, and that they die at a much higher rate than in their villages. But this alone does not justify a change in the policy of this Department, which is geared towards the final solution of our Indian Problem”.
For some reason internet “search” engines block my posts: http://www.ronpaulforums.com/showthread ... orld/page2

Who runs the world?
Look no further than Eton and the Bullingdon club.

ETON COLLEGE
Just a few of the power brokers that went to Eton.
Prince Harry, Prince William, Nathaniel Philip (Nat) Rothschild, Baron Jacob Rothschild, David Cameron (former PM), Boris Johnson (Mayor of London), Earl Spencer (Princess Diana's brother), Abhisit Vejjajiv (Thailand's PM), Prince Zara Yacog of Ethiopia: http://www.telegraph.co.uk/news/3815326 ... nians.html
Actor Rob James-Collier, explained that those with a “comfort blanket” of money to fall back on had a better chance of success. The Etonian Dominic West explained that these rich boys have it really difficult and that Etonian is a stigma slightly above paedophile in the media: http://www.telegraph.co.uk/news/celebri ... -West.html
There’s even a direct link to the Goldman Sachs that controls the US presidency: Boris Johnson became partner there. There is also a direct link to the Dutch Royal family: the late Prince Friso was director Investment banking at Goldman Sachs for a couple of years: http://www.independent.co.uk/news/uk/po ... 24679.html
Even some world famous authors went to Eton: Ian Fleming, George Orwell (Eric Blair), Aldous Huxley (also teacher at Eton) and Julian Huxley.
Don’t expect that for a mere £15,000 a year to go to Eton you can buy your little boy a career.

BULLINGDON CLUB
More controversial than Eton is the Bullingdon Dining Club (only students of Oxford) where we see a lot of Etonians return. They are known for their wild parties that includes vandalism, hookers, blood and lots of alcohol: http://tapnewswire.com/2016/01/breaking ... n-britain/
Just a few of the ex-members of Bullingdon: Baron Jacob Rothschild, Nat Rothschild, David Cameron, Boris Johnson, Jo Johnson, George Osborne, Lord David John Ogilvy (heir of the 13th Earl of Airlie), Philip Astor (brother of Lord Astor).
Here’s a picture from the 1987 Bullingdon Club with 2) David Cameron and 8) Boris Johnson.

In this Bullingdon photo from 1992, we can see: (1) George Osborne (Shadow Chancellor, (2) Harry Mount (Cameron’s cousin) and (7) Nat Rothschild. The photo has been tampered with: 5) is leaning on thin air and in front of Rothschild is a white shirt without body.

DAVID CAMERON
It’s real democratic that the Brits electorate can elect really independent politicians like - David Cameron.
David Cameron not only was part of Eton and Bullingdon; he descended from King James I, which makes him a fifth cousin, twice removed, from Queen Elizabeth. His wife Samantha Sheffield Cameron is the current heiress to the Astor family-fortune. Samantha is the great-grandaughter of King Charles II; which makes David and Samantha 11th cousins twice removed: http://hairbrushguzzle.blogspot.nl/2010 ... _9524.html

45.6 MILLION POUNDS FOR THE QUEEN IN 2017
Elizabeth will receive £45.6 million this year. The Queen gets a £2.8 million raise this year. The amount would represent a 57% increase for the monarch since 2012, when she received a mere £29.1 million: https://www.theguardian.com/uk-news/201 ... eign-grant
Sir Evelyn Rothschild serves as the personal financial advisor to Queen Elizabeth. She knighted him in 1989. I still don’t believe it…
Theresa May has signed a letter to the European Council to trigger article 50, for Britain to exit the European Union. A mere 9 months after a majority of the Brits voted for the Brexit (23 June 2016): https://www.theguardian.com/politics/20 ... article-50

Here’s the 6 page letter of Puppet Minister May of March 29: https://www.politicshome.com/news/europ ... article-50

Britain is expected to leave the EU by the end of March 2019. In another 2 years a lot can still go wrong. Like for example a new referendum…

It didn’t get much attention that on March 22, Tim Farron proposed a bill for a new referendum on Brexit: https://hansard.parliament.uk/commons/2 ... opeanUnion(Referendum
For some reason internet “search” engines block my posts: http://www.ronpaulforums.com/showthread ... orld/page2

US presidents - related to Royal families

In Kingdoms like Britain or the Netherlands, the head of state King/Queen holds the executive power. In colonies like Canada or Australia the Queen appointed Governor-General decides what happens.
In these type of dictatorships, parliament can only vote against the bills of the King/Queen...

The big benefit for the elite is that in this way, “they” only have to make sure that their puppets are selected for president. It’s easy to hide this practice...
There are lots of stories that all (or most) US Presidents are interrelated.


The 12-year-old BridgeAnne d’Avignon traced the lineage of 42 of all 43 US Presidents to King John of England.
Only President Martin van Buren wasn’t related to King John.

Prior to d’Avignon’s discovery, genealogists were only able to link 22 families of US presidents: http://www.dailymail.co.uk/news/article ... -king.html


George Washington was of royal blood.
John F. Kennedy was tied to the Kings of Ireland, like Ronald Reagan.

According to Brooks-Baker, George Bush is closely related to every European Monarch both on and off the throne, including Queen Elizabeth II, Duchess Sarah "Fergy" Ferguson and the late Princess Diana. His ancestry traces back to England's King Charles II.

Bill Clinton’s mother’s ancestry can be traced back to King Henry III who ruled England from 1227 to 1272. Bill Clinton's family is blood related to Gerald Ford and Jimmy Carter.
Ford was also related to Richard Nixon and George Bush.


See the chart with 25 closely related US Presidents. 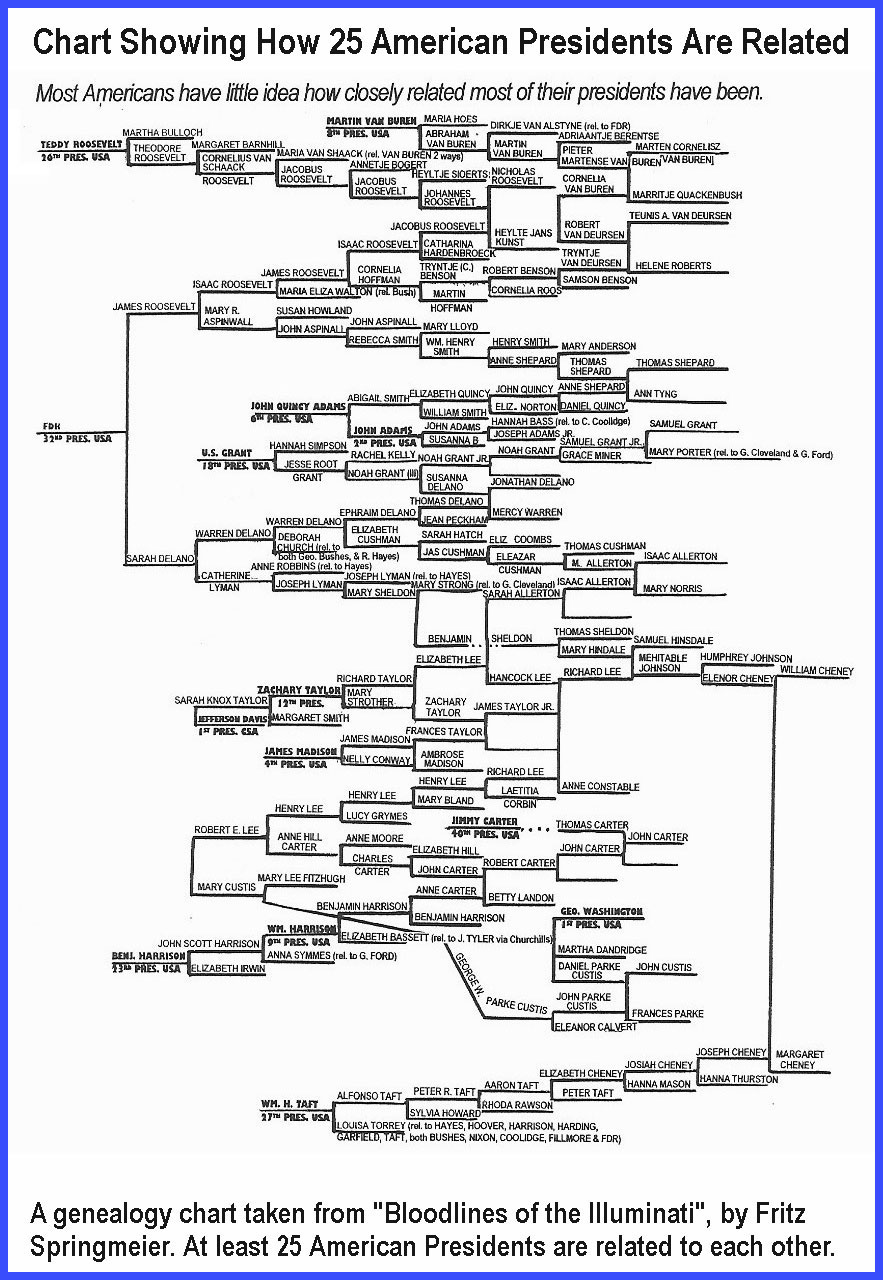 Many genealogists believe that Washington, along with most European royalty, descend from Odin.

In the book, The pedigree and history of the Washington family : derived from Odin, the founder of Scandinavia, B.C. 70, involving a period of eighteen centuries, and including fifty-five generations, down to General George Washington, first president of the United States (how's that for a title!) by it is claimed:

“Frode Fredigod, fourth generation, was King of Denmark at the time of Christ, died A.D. 35.

“Thorlin the Dane was the 32nd generation from Odin. He founded the Washington family. Born about A,D. 1000. His ancestors came from Schleswig, in Denmark and settled in Ebor or Yorkshire, prior to the Norman Conquest.

“Colonel John Washington was the 51st generation from Odin. He migrated to America and settled in Virginia. He was the great grandfather of George Washington.”

The book can be downloaded here:
https://archive.org/details/pedigreehistoryo00well

If the above is true, that Odin was the son of the supreme ruler of the Scythians, then he was likely a descendant of Ashkenaz, and therefore so was Washington.
Top

The following video exposes the British Royal family, the topics include.
Concealing their wealth of trillions (while their wealth is publicly stated to be in the hundreds of millions).
Queen Elizabeth owns large amounts of “Crown land” in the British Empire in particular her colony of Canada (90% of the land). Just their real estate is worth 17 trillion (pound or dollar?).
Much of their wealth comes from growing opium poppies in India and exporting it to China. After China destroyed a large quantity of opium, Britain started the opium wars.

The media help Royal families cover up their scandals.
Notorious paedophile Jimmy Savile was very close to the Royals, he was knighted in 1990. Hundreds of people must have known.
David Icke tells that a close friend of Princess Diana told him in 1998 that Savile was a paedophile and necrophiliac.
Prince Andrew sexually abused the underage Virginia Roberts (arranged by Clinton and Trump’s buddy Jeffrey Epstein).

The Royal family (originally from Germany) was affiliated with the German Nazis.
They murdered Princess Diana.
Inbreeding causes degeneration. Insane family members were pronounced dead and locked up in mental institutions.

Ten Native American children were taken by Elizabeth and husband Philip in Canada and were never seen again. Witness William Combes was murdered before he could testify.
Elizabeth was initiated in a Druidic ceremony (at a site were children were sacrificed) shortly before she was crowned Queen.


Information on the connection between Britain and Adolf Hitler: viewtopic.php?f=7&t=1340

Child trafficking in the UK

Britain is home to at least 136,000 modern-day slaves, according to the Australian human rights group Walk Free Foundation — about 10 times more than a 2013 government estimate.

In 2017, 2,118 children in Britain were suspected to have been trafficked — mostly trapped in sexual exploitation, slave labour and drug running — the highest ever annual number on record, and 66% more than in 2016.

Having no clear plan in place to prevent child trafficking in the UK ... should shame this government.


About one third of the trafficked children come from Britain, while the rest mainly come from Vietnam, Sudan, Eritrea, Afghanistan and Iraq: https://www.presstv.com/Detail/2018/09/ ... nt-failure

There is still no centrally recorded collection of this data and that is done to keep harm done to these children invisible: https://www.theguardian.com/global-deve ... nd-missing
For some reason internet “search” engines block my posts: http://www.ronpaulforums.com/showthread ... orld/page2