Comments about your favorite candidate, the newest PROPOSED law, and the FEMA camp near your hometown should go here.
Post Reply
244 posts

In a different study I read that at least 47% of all published statistics are made up on the spot out of thin air.
--
Editor
Lawfulpath.com
Top

Maybe the statement that one third of Americans doesn’t trust mainstream media isn’t any more reliable than a whole bunch of election polls that predicted that Hillary Clinton would win the presidential elections in a landslide.
The story in which I found it has some real interesting information on media manipulation in Germany.


I never suspected that the husband of Ivanka Trump, Jared Kushner, is such an interesting fellow.
After Ivanka failed to catch the heir apparent of the Rothschild trillions, Nat Rothschild, she got the next best thing – Jared Kushner.

IVANKA & KUSHNER – ADVISOR TO PRESIDENT
The daughter of Ivanka Trump, who already had a West Wing Office in the White House, is now an official advisor to President Trump. Ivanka’s husband Jared Kushner had already been appointed as a senior advisor to father-in-law Donald.
The couple Kushner have a security clearance, but are “unpaid”.
The Justice Department determined that this isn’t in violation of anti-nepotism laws. According to the state media this is actually better, because as official “advisors” the Kushners have to abide by federal ethics regulations.
Since 1967, a federal anti-nepotism law prohibits executive branch officials from appointing their relatives to jobs.
Trump is certainly not the first president to appoint close relatives. President Franklin D. Roosevelt’s son James served as his secretary. Dwight D. Eisenhower’s son worked as assistant staff secretary in the White House. John F. Kennedy made his brother Robert attorney general and put his brother-in-law, Sargent Shriver, in charge of the Peace Corps: http://www.csmonitor.com/USA/Politics/2 ... -the-risks

FINANCIAL TIES – BLACKSTONE, GOLDMAN SACHS
There are some concerns about the financial ties of the Trump administration.
Last January, Jared Kushner stepped down from his management positions at Kushner Companies, a family-run real estate investment firm that has taken part in more than $7 billion of acquisitions over the past decade.
Jared will remain a beneficiary of the business, through a series of trusts that own the various real estate companies. The worth of this estate and investment business is estimated at $740 million.
Jared Kushner didn’t disclose information on his business partners or lenders to his projects. His real estate firm has borrowed money from amongst others: the Blackstone Group, Goldman Sachs, Deutsche Bank, Natixis bank (France), and Hapoalim (Israel’s largest bank).

The CEO of the private equity giant Blackstone Group (one of the corporations of Baron Jacob Rothschild) Stephen A. Schwarzman, was made an economic adviser to Donald Trump and chairman of the “Strategic and Policy Forum”.
Kushner is also partners in crime with BlackRock, the world’s largest asset manager (I’m not sure about the details). BlackRock was founded in 1988 as part of the Blackstone Group. According to the state media BlackRock is independent from Blackstone since 1995. The founder and CEO of BlackRock is Larry Fink.

Gary D. Cohn, the former president of Goldman Sachs, now heads the National Economic Council. Cohn’s net worth is valued between $253 million and $611 million, and his income last year was $77 million.
Another White House official, Reed Cordish, who heads technology initiatives, accumulated assets valued at $424 million.
The Trump’s administration is considered the wealthiest in American history, with according to Bloomberg members of his senior staff and cabinet worth an estimated $12 billion: https://www.nytimes.com/2017/03/31/us/p ... .html?_r=0

Around the time Trump received the Republican nomination, Kushner’s firm began negotiating with the Chinese Anbang Insurance Group, with ties to some of the Communist Party’s leading families about a plan to invest billions of dollars in Kushner’s office tower at 666 Fifth Avenue in Manhattan.
After Donald Trump became the president elect, Anbang became even more determined to close the deal with Kushner.
They ended the talks when the deal became too controversial after weeks of negative publicity. The building had already been rescued by other prominent companies, including: Carlyle and Zara (of multibillionaire Amancio Ortega): https://www.nytimes.com/2017/01/07/us/p ... .html?_r=0

The White House has acknowledged that Jared Kushner together with Michael T. Flynn, Trump’s former national security adviser, met the Russian ambassador to the United States, Sergey Kislyak, in late November or early December, 2016 in New York.
The Russian ambassador is apparently quite popular amongst Trump’s partners in crime.

The father of Jared, Charles Kushner, has been embroiled in a nasty family feud over how to distribute the business’s proceeds. At one time, Charles hired a prostitute to seduce his brother-in-law, videotaped the encounter and sent the footage to his sister.
Charles pleaded guilty, and in 2005 was sentenced to 2 years in prison for tax evasion, witness tampering and illegal campaign donations.

CADRE - GEORGE SOROS
According to Forbes, the Kushner family is worth at least $1.8 billion.
Jared’s brother, Joshua (Josh) Kushner, started his working career at… Goldman Sachs
In 2015 Jared, Josh, and Ryan Williams (of Blackstone, who became Cadre’s CEO) founded the investment firm Cadre.
The money came from Goldman Sachs and George Soros: https://www.forbes.com/sites/chloesorvi ... 66f6c12f42
George Soros invested more than $250 million in Cadre: https://therealdeal.com/2017/01/27/geor ... tup-cadre/
That’s the same George Soros that supported Hillary Clinton with campaign contributions and “criticising” Donald Trump, and who were together involved in a bankruptcy fraud involving the General Motors building in New York.


TRAVEL BAN
The Trump administration first appealed the federal court order issued in Maryland (that blocks part of the revised travel ban).
The federal appeals court (fourth circuit) has set arguments for May 8, which makes it unlikely that it will decide soon: http://www.politico.com/story/2017/03/d ... urt-236435

Then on March 29, the Hawaii federal judge extended the blocking of Donald Trump’s (second) travel ban.
On March 30, the Donald Trump administration (DoJ) finally appealed the Hawaii court order to the ninth circuit that earlier decided to uphold the blocking of the first travel ban by Judge Robart.
According to District Judge Derrick Watson the ban will harm the state’s universities, tourism and the imam of a Honolulu mosque (who joined the lawsuit).

According to Richard Primus, professor constitutional law at the University of Michigan (EDIT - "new" link):

What a ruling in 4th Circuit in favor of the administration would do is create a split in authority between federal courts in different parts of the country. Cases with splits in authority are cases the U.S. Supreme Court exists to resolve

Give me some time to verify and to draw up a response - if this is true we cannot allow this to happen !!
Top

The info at this link has helped me to put the mental pieces together about Yemen.
Top

Guardian wrote:Thank you for this information - was not sure where you were going with this story earlier but this last post is at face valid dynamite and certainly fits the profile of what the UN are trying to achieve

I cannot predict where this thread is going.

I'm planning something about:
- Syria (but that won't be in this thread).
- Two more people in the Trump team that don't have clean hands.
- Drug running by the Clintons.

Yemen is certainly one of the most overlooked topics by our deaf, dumb and blind journalists!
I certainly plan to add about Yemen; I was thinking some historics, maybe Notmartha's link has the information on that.
For some reason internet “search” engines block my posts: http://www.ronpaulforums.com/showthread ... orld/page2


SCOTT GOTTLIEB – BIG PHARMA HEADS THE FDA
Donald Trump has chosen Dr. Scott Gottlieb, a conservative health policy expert with deep ties to the pharmaceutical and biotech industry, to lead the US Food and Drug Administration (FDA).
Gottlieb was healthcare analyst at the investment bank Alex, Brown & Son, who decided he could make more money by entering pharmaceutics as a Dr.
Since 2005 he is a writer for Forbes magazine.

Scott Gottlieb is completely tied up with the pharmaceutical industry.
Gottlieb is a director at Tolero Pharmaceuticals and Daiichi Sankyo Inc., and on the investment board of GlaxoSmithKline (the pharmaceutical giant that sells the highly toxic AZT).
Gottlieb has earlier worked on the development of the FDA's policies related to the approval of fixed dose combination drugs for the treatment of AIDS-victims.

Gottlieb is also a partner at T.R. Winston (a merchant bank) and a venture partner at investment firm New Enterprise Associates, which invest heavily in health care and biopharma.
From 2013 through 2015 Gottlieb received some $413,700 from drug companies for “consulting, speaking or other services”. In 2015 alone, he collected $199,951 from eight drug companies, most of it coming from Vertex, GlaxoSmithKline, and Daiichi Sankyo (see the following picture). 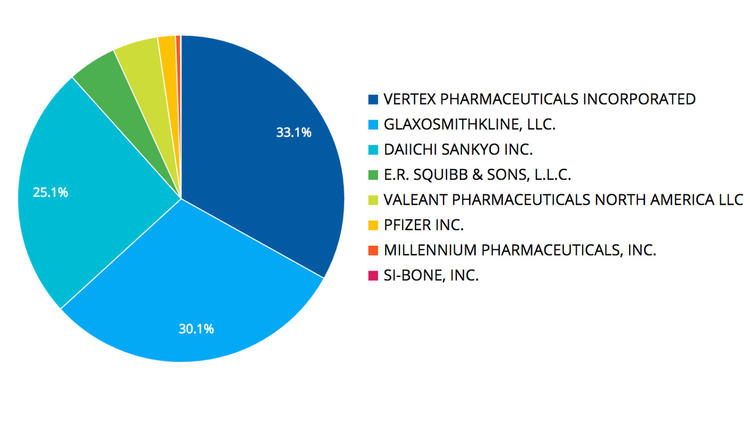 When he was appointed by President George Bush Jr. for the FDA in 2005 Gottlieb’s conflicts of interest raised eyebrows. Gottlieb had to recuse himself for up to a year from matters involving 9 drug companies, including Eli Lilly, Roche, Procter & Gamble and Sanofi-Aventis.
Some of the companies involved with Gottlieb, have a controversial reputation. In 2012, GlaxoSmithKline paid $3 billion to settle charges of improper marketing and other practices. In 2009, Eli Lilly paid $1.4 billion to settle similar charges.
In 2009, Pfizer settled a health care fraud for $2.3 billion: http://www.latimes.com/business/hiltzik ... story.html

Gottlieb has repeatedly criticised FDA’s “flawed culture” in which the safety of a drug is too much of a concern. Gottlieb will try to dramatically cut regulations governing food, drugs, cosmetics, dietary supplements and tobacco, so the pharmaceutical industry doesn’t have to worry about something minor like the health of their victims.
Of course this is not a drastic change from the policy under the Obama administration. FDA review for new drugs has fallen from an average of about 18 months a decade or two ago to about 12 months more recently, while the percentage of approvals of drug applications has risen to more than 90% in 2015.
Gottlieb was chosen over Jim O'Neill, a libertarian investor close to Silicon Valley billionaire Peter Thiel.
A survey by Mizuho Securities USA Inc of 53 pharmaceutical executives found that 72 % favoured Gottlieb over other potential candidates: http://www.reuters.com/article/us-usa-h ... SKBN16H2AM
Last edited by Firestarter on Wed Dec 12, 2018 3:05 pm, edited 1 time in total.
For some reason internet “search” engines block my posts: http://www.ronpaulforums.com/showthread ... orld/page2