False Flag -- A horrific, staged event, blamed on a political enemy and used as a pretext to start a war or enact draconian laws in the name of national security.
Post Reply [phpBB Debug] PHP Warning: in file [ROOT]/vendor/twig/twig/lib/Twig/Extension/Core.php on line 1275: count(): Parameter must be an array or an object that implements Countable

2 posts [phpBB Debug] PHP Warning: in file [ROOT]/vendor/twig/twig/lib/Twig/Extension/Core.php on line 1275: count(): Parameter must be an array or an object that implements Countable
• Page 1 of 1

Just a heads up that ANTIFA is purportedly planning to burn the flag and desecrate graves at the Gettysburg National Cemetery on July 4th. This is supposedly going to be proceeded and/or followed by large amounts of fireworks in the cities and suburbs as a cover-up for gunshots. The locals know about the threat, and are beefing up security. Public affairs at Gettysburg said no permit to protest at cemetery was applied for. 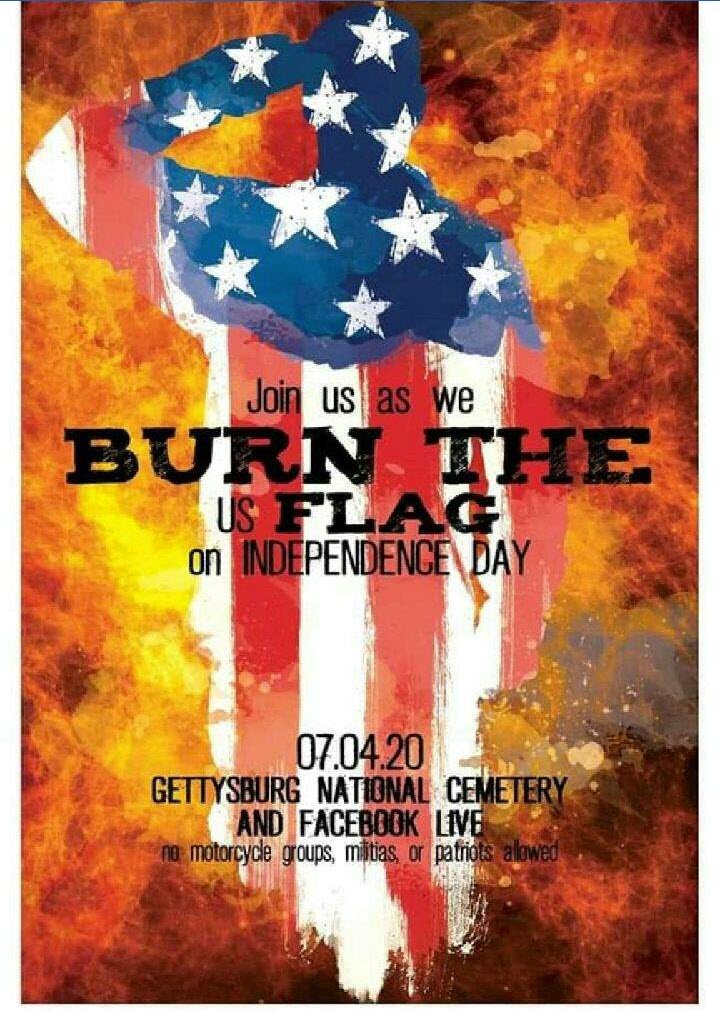 Of course telling bikers and militia they are forbidden is just an invitation. I'm sure MAGA hats will be worn by most of the "bad guys".

and the "truth or fiction" site saying Turner's site is disinformation:

What I will say about Turner's article -

There are in fact tons of fireworks going off every night in the cities and suburbs. It is very dry in Pennsylvania, and fires are starting. And people are calling the "authorities" to complain about noise and possible gunshots. So this part of Turner's article is in fact true. I can't say about the other parts.

Could be something or absolutely nothing. The potential for a huge false flag involving "right-wingers" paid by Soros versus "left-wingers" paid by Soros, along with the thousands of fed up, broke, armed (firearms sales and concealed carry permits skyrocketed since plandemic started), and cagey (due to being under lockdown for over 4 months) Pennsylvanians who might bring something organic to the table, there is definitely potential for something.

As Gerald Celente said, "When people lose everything and they have nothing left to lose, they lose it."
Top

Re: Heads Up - Antifa Gettysburg

Wanted to add some info about the potential for destruction on this day...

The behind-the-scenes movers and shakers of events like this are generally Luciferian. Luciferians give special meanings to certain dates based on numerology, moon phases, and sun position. These special dates are filled with rituals including but not limited to large fires and human sacrifices. July 4th, 2020 is special to them for the following reasons:

- Full Buck Moon and Eclipse (easy for occultists to move around in light of full moon, and full moon gives extra power to magic spells) Full Moon will rise after sunset in the evening of Saturday, July 4, before reaching peak illumination at 12:44 A.M. Eastern Time on Sunday, July 5. Called "buck moon" because it is when antlers on bucks emerge. The full moon brings with it a penumbral eclipse, which occurs when the Moon crosses through the faint outer edge of Earth’s shadow (the penumbra), making part of the Moon appear ever-so-slightly darker than usual. It will begin at 11:04 P.M. EDT (8:04 P.M. PDT) on July 4 and end at 1:56 A.M. EDT on July 5 (10:56 P.M. PDT on July 4).

- Earth is farthest from the sun on July 4th.

- before the calendar was changed in 1752 from the Julian to the Gregorian, the summer solstice (Midsummer's Day) was celebrated on June 24th. The Julian calendar was 10 days slow, so the “new” date of July 4th was actually the “old” June 23rd (Midsummer's Eve). As a result, instead of celebrating Midsummer’s Eve on June 23, many celebrated Old Midsummer’s Eve on July 4th. Satan’s special holiday of “resurrection” and the lighting of fires and sacrifices to the Sun-god was transferred from the 23rd of June, to the 4th of July! see HERE

2 posts [phpBB Debug] PHP Warning: in file [ROOT]/vendor/twig/twig/lib/Twig/Extension/Core.php on line 1275: count(): Parameter must be an array or an object that implements Countable
• Page 1 of 1